Scripting is an important aspect of Phaedra, as it adds a degree of flexibility to the application that is needed to support:

Scripts are written by users or administrators, and can be triggered in various ways in Phaedra. Out of the box, Phaedra supports the following scripting languages:

While JavaScript and R are well-known programming languages that can be used for all three of the above cases, JEP is a formula-based language, and is used only for (2): Feature calculation.

An addon is available that allows you to script in Python as well, see the Python Addon.

The rest of this document assumes you are familiar with scripting in general, including concepts such as function calls, variables, etc.

To test a script snippet, you can use the Console view. To open this view:

In the Console's toolbar, click on the blue screen icon and select the language you want to script in. 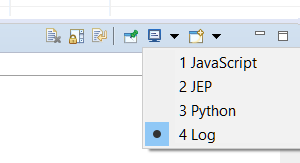 Note: most of the examples below are written in JavaScript.

Object-oriented scripting languages (JavaScript, Python) by default expose an object named API. This object is a registry of services that grant you access to data in Phaedra, and methods to manipulate that data.

To view the list of services available in the API, type:

To obtain a particular service, use the get function, for example:

All services that are exposed by the API, are documented in the Javadoc pages.

Phaedra's data capture component is heavily scripted. The primary reason for this is the fact that data capture is very much dependent on the user's infrastructure and data file formats. Phaedra offers a number of generic data capture scripts out of the box, but in a real life scenario it is very likely that at some point, you will have to customize or write your own data capture script. 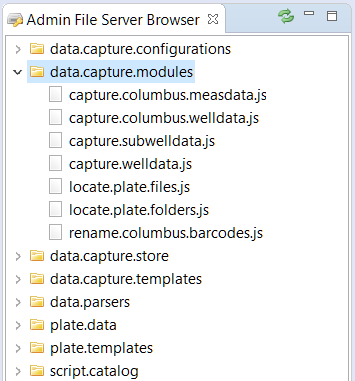 The folder 'data.capture.modules' contains all the scripted modules that are currently known to Phaedra. Double-click on a file to open it.

You will notice that most data capture scripts start with this line:

This is a reference to the script catalog, to a script named 'common.js'. To see the contents of this common.js script (and the whole script catalog), navigate to script.catalog > dc > common.js

The purpose of the common.js script is to provide a number of convenience functions, for example to find files or folders based on regular expressions, or to parse XML or CSV files.

Data capture scripts are only called during a data capture job; they cannot be called directly. When they are called, they receive several additional objects to work with:

When setting up or editing a Protocol Class, you can attach calculation formulae to well features.

This piece of script will be evaluated for every well, and thus expects one return value (numeric or string) for each invocation. For example, the below JEP expression returns a division of two other well features:

For most simple calculations, the JEP language is recommended as it is the most compact language. However, you can choose another language from the list, and enter a much more complex formula if you like. Custom calculation scripts have access to these additional objects:

JEP (Java Expression Parser) is a compact language for writing one-liner expressions. They are well suited for writing feature calculation formulae that refer to other features, and do not involve extensive coding. 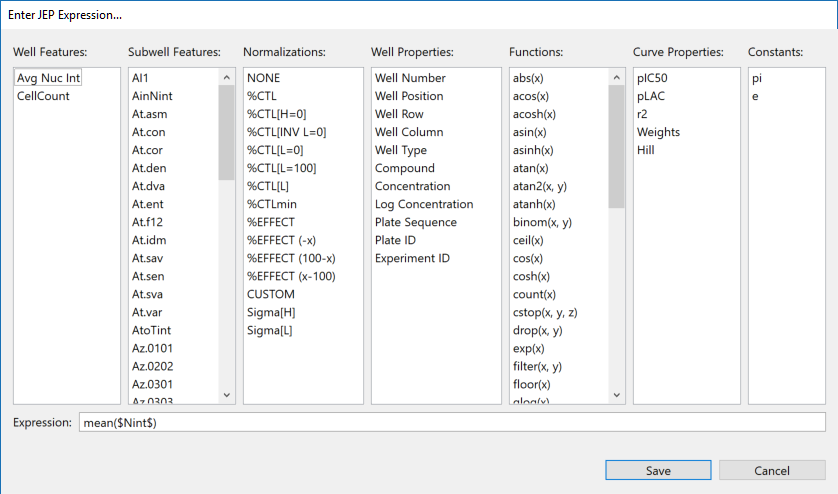 References are just that: references to values. Phaedra supports 3 types of references:

In addition, references can be extended in two ways:

JEP comes with a predefined set of common mathematical functions, such as count(), mean() and many more. These functions often accept one or more arguments, which are usually references to single values or vectors.

For example, when the function call med($AvgNucInt$) is evaluated against a well, it will compute the median of the vector containing the 'AvgNucInt' values for all cells in the well.

To get more information about a particular function, open the JEP Expression dialog and hover the mouse cursor over a function in the function list.

In addition to the scenarios described above, you can also write and run arbitrary scripts on plates, at any time. There are two ways to go about this: Console Scripting and Catalog Scripting.

You can write scripts on the fly in the Console view. For example, to modify a plate's barcode:

This is most suited for small, one-off scripts. For more complex scripts that can be reused, use the Catalog approach below.

Scripts can also be uploaded into the script catalog, but this requires administrator privileges. To view or modify the catalog, select Administrator > File Server Browser > script.catalog > misc

Catalog scripts can be run by any user on any plate they have access to. To do this, select one or more plates, right-click and select Scripts > Run Script from Catalog.

Scripts that are uploaded into the Script Catalog, can also be used to generate plots. To view such plots, open the Scripted Chart view: select Window > Show View > Other... > Scripted Chart. 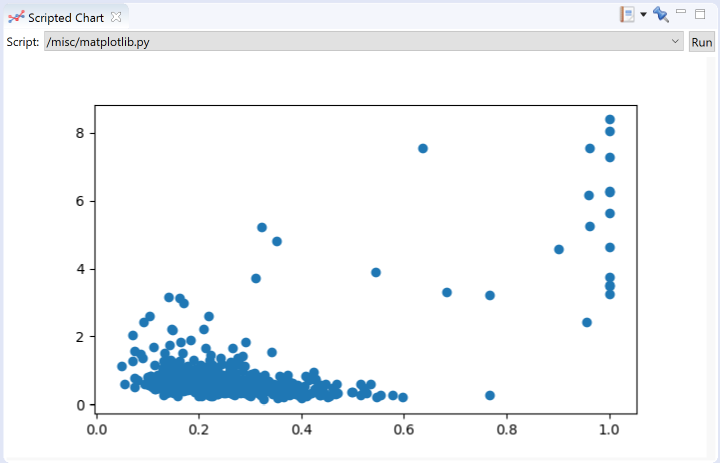 For more information on scripted charts, take a look at the scripting tutorials (see below).

A number of tutorials on the above script types can be found on GitHub.